What’s the connection between an Israeli culinary favorite and women of Scripture?

Our next major religious festival is Pentecost, on May 20. But in between is another holiday. No, not Lag B’Omer, which we marked last week, on the 33rd day between Passover and Pentecost. I’m talking about International Hummus Day, marked on May 13. Google it. 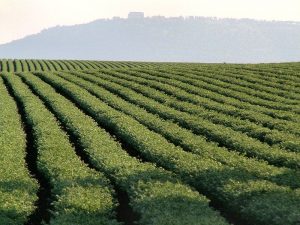 A hummus field in Galilee, with Mount Tabor in the background. Photo: Eitan F, Wikimedia Commons.

This blog is about hummus, which is mentioned in the Bible once, in the story of Ruth, though not by that name.  In Ruth 2:14, Boaz said to our heroine, who’d been hard at work harvesting his barley all morning: “Come here, and eat of the bread, and dip your piece of bread in the vinegar.” Hard to imagine serving vinegar to a hungry lady you want to impress…not even balsamic vinegar, as the Israeli author Meir Shalev has pointed out, and not even “wine vinegar” as the New International Version translated the Hebrew word hometz (that’s the modern Hebrew word for vinegar). And elsewhere in the Bible where hometz is mentioned, it’s not something you’d consume by choice (Prov. 10:26, Psalm 69:21, for example, and see Matt. 27: 48). So what was the dip? Some say it must have been hummus – pureed chickpeas. 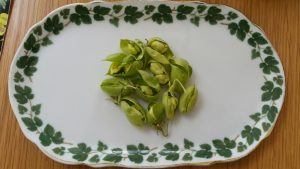 When we adjust our biblical lens to imagine Boaz offering Ruth pita dipped in hummus rather than vinegar, it becomes a different story, literally. Hummus  with a little olive oil, salt, garlic and lemon (in our day that is, no lemons in the Bible), is delish, and apparently for Boaz, it was a surefire way to get a second date.

Everybody likes to try the pureed version of hummus when they come to Israel. I’d like to tell you about a less well-known way to enjoy it. The next course of that memorable Bethlehem lunch date was parched grain, a biblical staple. “Parching” basically meant toasting the green, still-sweet heads of grain in a pan over the fire. You can do the same thing with hummus in the pod. And I do just that,  for the few weeks a year I can get it fresh in the fruit and veggie shop in our neighboring village of Abu Ghosh. But if you’re not going to be passing through Abu Ghosh or an open-air Israeli or Middle Eastern market any time soon, I’ve been told that in the U.S. you can sometimes find fresh hummus at farmers’ markets and specialty stores.  So here goes: Heat a medium-size skillet with a tablespoon of olive oil and sprinkle some sea salt in the bottom. Place a layer of fresh hummus, right in the pod, in the pan and shake it around for a few minutes, browning it nicely on all sides. That’s it. Put the whole pod into your mouth to get the salty flavor, holding on to the end of it, then pop out the chickpeas (two or three per pod usually), remove the pod and discard. Hands get oily, have napkins handy. Fun for the whole family, and an idea for a little home-school project. 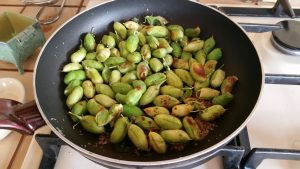 Fresh hummus in my skillet, almost ready to munch on.

Speaking of the whole family, as you snack on your toasted hummus, or dip your pita in hummus puree for that matter, you can teach a Bible lesson on charity from the book of Ruth: Remember how Ruth, whose great-grandson was King David, went out to glean? She was harvesting the stalks in the corners of the field that Boaz had left for the poor, as commanded by Leviticus 23: 22:  “When you reap the harvest of your land, you shall not wholly reap the corners of your field…You shall leave them for the poor and for the stranger.” As the ancient Jewish sages said: “Why was the Book of Ruth written? To teach us the greatness of reward for deeds of lovingkindness” (Ruth Rabba 2:14).

The Gleaners, by 19th-century artist Jean-François_Millet. The artist was criticized in his day for too “social-minded” a subject. 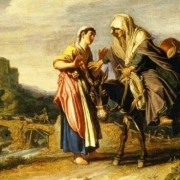 What “a Mother” Wants: Tale of Darkness – Season of Light
2 replies