Where the Rest Is History – Literally

This Christmas, let’s make an armchair visit to a humble rocky outcrop on the road to Bethlehem. It marks the place where Mary, about to give birth, sought respite, a storied site of miracles and celebration, where one of the largest churches in the Holy Land once stood majestic.

Just a few days from now pilgrims will be making their way from Jerusalem to Bethlehem to celebrate the nativity. All eyes are turned to the famous little town where colorful spiritual pageantry abounds. But that’s not where I’m going to take you now. We’re going to little known site on the road to Bethlehem.  No church stands there now, no lines of pilgrims wait to enter – that’s because there are no doors and no roof. Virtually all you see above ground is a mound of bedrock reaching up to the endless sky and a few fallen pillars. And yet, about a millennium and a half ago, no Christian would pass by here without looking up in awe and stopping to pray, praise and proclaim. 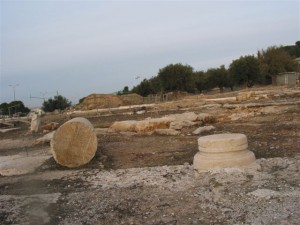 A view of the Kathisma – “Mary’s seat.” Does it seem a bit forlorn?  Look at the next picture! (Photo: Miriam Feinberg Vamosh).

It’s the Church of Kathisma – that word means “seat” in Greek – and it marks the place where tradition says Mary rested on the way to Bethlehem, just before giving birth to Jesus.

Mary’s pre-partum rest was mentioned often in ancient texts as far back as the second century, and eventually, so was the church that marked it, which became world-famous. Yet it managed to disappear, seemingly without a trace. And though archaeologists knew of significant Christian ruins lacing this hillside, the location of Kathisma might still be a mystery if not for its accidental discovery during road construction in 1992, and its excavation, by Dr. Rina Avner of the Israel Antiquities Authority.

The ruins are located in an olive grove on the northeastern corner of the intersection of the main Jerusalem-Bethlehem road, with the road leading east to Herodium.  They’re not officially open to the public, though…see above…there’s no door to stop you. The ancient rock where Mary rested is unmistakable – rising from the ground about 60 inches high, 6 feet long and 11.4 feet wide. And once you’ve spotted it, you then can’t miss the remains of the octagonal walls and a few of the columns, now fallen, which once surrounded it. 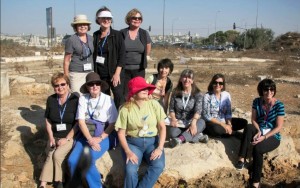 Here we are – a group of Marys, Maries, Marias, Mary Janes… and one Miriam – everyone in our group with a version of the famous name, invited to rest on “Mary’s Seat” for a photo to commemorate our visit. Photo: Dr. Bill Creasy

The building was huge – it measured 114 feet long and 123 feet wide. As ancient pilgrims circumnavigated its three concentric octagonal corridors, they could glimpse the famed stone seat, and could break off from time to time to pray in a number of chapels along the hallways. The chapels were carpeted with multi-hued mosaics in intricate patterns – geometric designs, leaves, vines, fruit and flowers galore, along with motifs from the world of jewelry and even textiles, the later ones bearing a remarkable resemblance to the mosaics of the Dome of the Rock.

These gorgeous mosaic floors have all been covered up to protect them until such time as they can be properly displayed. In the early days after the discovery, I was sure that the powers that be – ecclesiastical, political and academic – would get together right away to reconstruct this once-magnificent building. You guessed it…I’m still waiting. 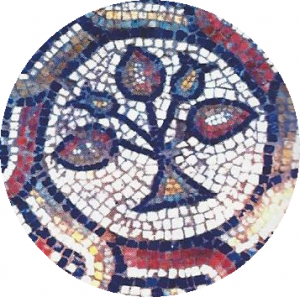 Detail of a mosaic from the Kathisma (courtesy of Dr. Rina Avner).

And now, a little history and tradition: The first mention of Mary resting just before Jesus’ birth goes back to the second-century Gospel of James, and was associated (and continued persistently over the centuries to be so) with the story of another biblical birthing mother –  Rachel the Matriarch – only a few miles to the south, where her tomb still stands, meaningful to all three monotheistic faiths. Legends about the rock abound (you can read more about them in the resources I list below). By the fifth century, the Feast of Theotokos (“Mother of God”), had been instituted, probably the earliest celebration devoted to Mary, Scholars say it took place at a specific site on the road to Bethlehem where the Kathisma was eventually built, endowed by a wealthy widow named Ikelia. Later the building was expanded and parts were remodeled. In the eighth century part of the church was converted into a mosque, with Marian veneration persisting here at least until the ninth century.

The jewel in the crown of the Kathisma’s many magnificent mosaics is one that symbolically recalls the oft-repeated legend of an exhausted and thirsty Mary sustained by a date palm that bent its branches toward her so she could eat its fruit, and a miraculous spring that emerged from its roots. The Muslims adopted this tradition as well; a version of the story is also found in the Quran. 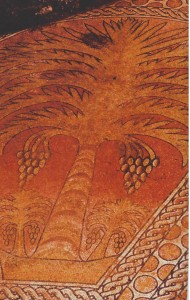 At the Kathisma, don’t let appearances deceive you. Viewed with the eyes of the soul and imagination, this is one powerful place! I still hope that such an evocative site, which weaves together some of the most beloved of our different religious traditions – will someday be restored as a monument to our shared human spirit.

Merry Christmas to one and all.

Detail of a mosaic from the Kathisma courtesy of Dr. Rina Avner).

Learn more in the resources below:

Rina Avner, “The Recovery of the Kathisma Church and Its Influence on Octagonal Buildings.” Offprint from One Land–Many Cultures, Archaeological Studies in Honor of S. Loffreda (Studium Biblicum Franciscanum Collectio Maior 41). Jerusalem 2003.

And in the same offprint, Leah Di Segni, A Greek Inscription in the Kathisma Church.”

Miriam Feinberg Vamosh, “The Most Important Ancient Church you Never Heard of.”

No author cited, “The Church of the Seat of Mary” http://www.mfa.gov.il/mfa/israelexperience/history/pages/the%20church%20of%20the%20 seat%20of%20mary%20-kathisma-.aspx. 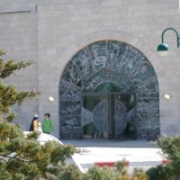