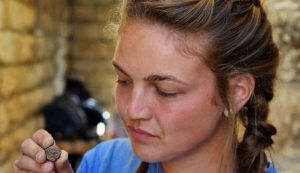 Woman holding a coin from the Jewish revolt, Jerusalem March 2018. Courtesy of Eilat Mazar/ the Hebrew University of Jerusalem

When I saw the photo at right, provided to the press by the Hebrew University of Jerusalem and archaeologist Eilat Mazar, my mouth dropped open. It’s as if reality raided my literary imagination (instead of the other way around!). There she is! The unnamed woman in this picture ponders a tiny Jewish rebel coin she grasps. It was one of a trove discovered in Mazar’s Ophel excavation in Jerusalem south of the Temple Mount. Even the stone walls in the background eerily recall the scene from The Scroll, a scene that played out (in my mind’s eye) at the fortress of Masada, after the destruction of the Temple. Here’s the scene as I wrote it:

The stone was loose and she pried it out easily. Behind it lay a small bronze box, whose top was beaten into a delicate chain of rosettes. Inside was…a purse with the twelve silver shekels, with which her mother had entrusted her after her father was killed. It would easily pay the first three months’ rent on the house in which they would live after they left Masada, her mother had said—triumphant, of course…after the last of the conqueror’s soldiers had left Judea forever. More than two years had passed since she had last opened the coin purse. It had had no value for her on the mountain. Neither did a single little bronze coin, minted in the white-hot forge of the revolt, brought to the fortress by refugees from the fallen city. Now it gleamed dully at her when she opened up the purse. Its inscription “Jerusalem the Holy,” seemed to mock her.

Mazar and her team found the tiny bronze coin together with dozens of others in a cave south of the Temple Mount. The finds unearthed in the cave take us back to the last desperate days of the first revolt of the Jews against the Romans (66–70 AD). Numerous pottery fragments were also found, mainly jars and cooking pots. The dates on the coins and their inscriptions reflect the backdrop of the times I sought to bring alive in The Scroll.

These coins bore the mark – literally – of the Jewish rebels’ fight for independence.  The coins, which by their very minting rejected Roman dominion, bore unmistakable Jewish symbols such as the Four Species, invoking the Feast of Tabernacles and joyous pilgrimage to the Temple. Moreover, they advertised each year of Jewish freedom. The legend on the earlier coins reads: “Year 2 of the freedom [herut] of Zion,” proclaiming the hope for liberation, just at hand, they believed. But, as Mazar pointed out, seared into the later coins, produced after the deadly Roman siege on Jerusalem had begun, was a cry for divine intervention: “Year 4 of the redemption [geulat] Zion.”

The cave in which the coins were discovered is a large one – 21 x 47 feet. The archaeologists say that one amazing aspect of the discovery is that such a large cave, which was partially visible to boot, was never again reused after the Temple was destroyed.  It’s almost as if  it was waiting for Mazar’s team to reveal it to us, to remind us of the precious gift of freedom that we celebrate on Passover.

As for the fate of my imaginary character and her coin in The Scroll? Hint: She was one of the survivors of Masada. She trod the same desperate road as the rebels who left those coins behind in the cave, until she reached her destiny’s crossroad. For me, she symbolizes every woman of faith who  chooses life against unimaginable odds. 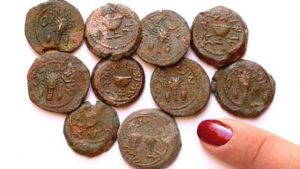 Some of the Jewish rebellion coins, recently discovered in Jerusalem. Courtesy of Eilat Mazar/the Hebrew University of Jerusalem

May  this Passover and Easter bring the blessings of renewed strength and hope for all.

The Scroll; An Unforgettable Holiday Read