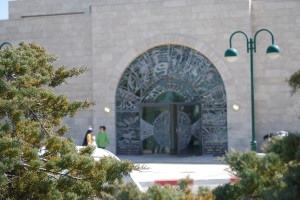 Façade of our synagogue in Har Adar. The doors feature the symbols of the Twelve Tribes; a theme of unity that we strive for today (“unity in diversity” would do just fine if we could get there).

The “Fourbears” of Jewish Dispute and That’s No Typo

No that’s not a typo – I didn’t intend to write “forebears.”  And I’m not referring to a quartet of big furry animals either. That was just to get your attention. Seriously, these are the four groups in Jewish society in the days of Jesus that were the intellectual and spiritual ancestors of the Jewish People, and they knew how to be ferocious. Some of their roaring echoes right down to us today .  To be fair, scholars usually say only one of these four groups gave rise to modern Judaism, but I believe we can see them all among us today.

I haven’t followed the usual order  in which you  see these groups presented. Instead, you’ll see I’ve sandwiched the two most familiar groups between the lesser known, smaller sects – the Essenes and the Zealots – and as you read on, you’ll see why.

Alright, let’s start with what is perhaps the most famous of their beliefs because of the pun it gave rise to: The Sadducees did not believe in the afterlife, and so they were…”sad, u cee” (and this was invented before our texting kids thought “u” was the right spelling and would correct the spelling of the last word to “c”). The reason the Sadducees did not believe in an afterlife was because they rejected the interpretations of the Five Books of Moses that the other main group, the Pharisees based much of their belief on, and it is in these interpretations that believe in the afterlife becomes most prominent.

“You are quite wrong”

On this score, Jesus tells the Sadducees: “and as for the dead being raised, have you not read in the book of Moses, in the story about the bush, how God said to him ‘I am the God of Abraham, the God of Isaac, and the God of Jacob?’ He is God not of the dead, but of the living; you are quite wrong” (Matt. 22:32).

The word “Sadduccee” is the Greek form of the Hebrew root tzadak which also gives us the name Tzadok (Zadok). That’s the name of the High Priest who annointed Solomon (1 Kings 1:39) and many scholars say this group traced its origin to him. Indeed, many of the Sadducees were priests and high officials in the Temple. As such, they controlled the worship, had access to enormous resources, and consequently were the high society of the day. They were educated folk, hence their association with the “scribes” – people who knew how to write and were therefore in charge of copying the Holy Scriptures as well as letters and other important documents that gave them a great deal of power. The Hebrew root word tzedek gives us all the words connected with righteous, including the word tzadkani, which we use today to mean “self-righteous.” Given the power that they wielded, perhaps they considered themselves “righteous.” Scholars also say that the Hebrew name for this group Tzdukim also comes from the way they viewed themselves – as the most righteous of all the Jews.

This group is most famous for living in the desert (scholars often say they are the ones who lived in the famous site of Qumran near the Dead Sea, and who wrote the Dead Sea Scrolls), but according to Josephus, they also lived in cities, but in their own small groups. In the communities in which they lived they shared and shared alike, much like the early Christians.  The origin of their name is much less clear than any of the others. Many scholars connect it with the word “humble” or “pious” if it comes from Greek. If it comes from Hebrew, some connect it with the word “silent” or “secret” hashai. Particularly interesting is the idea that their name comes from an Aramaic word for healer, asa, viewing them as knowledgeble in this field. This is the way you will meet them in “The Scroll,  where imagine them as living on a slope above that ancient town, based on the Roman historian Pliny’s description of where they lived. However, most scholars interpret the words “above Ein Gedi” as meaning Qumran, where the Dead Sea Scrolls were discovered. The people who wrote the Dead Sea Scrolls clearly believed in the resurrection of the dead, which associates this group with the Pharisees (see below).

The Dead Sea Scrolls also show us how the way the people who wrote them, as many scholars presume, the Essenes, interpreted Scripture had a connection with the way the Gospels did. One example of this can be found in the “Habakkuk Commentary” one of the Dead Sea Scrolls on exhibit in the Shrine of the Book in Jerusalem.  This commentary on the biblical words of the prophet by that name quotes from the biblical text and then, basically, says “this is what it means, how it will be fulfilled in our time.” That is strikingly similar to the way Matthew interprets scripture, for example, Matthew 4:13–16. Perhaps the most significant example of this way of interpretation can be found in Luke 4:14-18, Jesus in the synagogue at Nazareth (see below).

Moving ahead of myself for a moment, this was also the way the Pharisees interpreted Scripture, and, of course, the way both Jews and Christians interpret Scripture to this very day.

The Essenes, according to the Dead Sea Scrolls, also practiced ritual immersion to a greater extent than other Jewish people. Scholars have often pointed out that John the Baptist’s emphasis on water baptism may have come through his stay with this group at some time in his life.

The Essenes had a solar calendar, which was different from other Jews at the time, who observed the passage of the weeks and months, and the holidays, according to the lunar lunar cycle, as Jews do today.

This group, which was vehemently opposed to Roman rule, was founded by one Judas the Galilean, who is actually believed to have come from Gamla in the Golan Heights. Judas began a revolt against Roman rule following its demand for the censusRome demanded in the time of GoverorQuirinius (CITE). This Judas is also mentioned in Acts 5:36–38 as a failed messianic leader.  One of the early leaders of the Great Revolt of the Jews against the Romans (66-73 CE) Menahem, may have been a descendent of Judas; a cousin of Menahem was the leader of the rebels at Masada. There were many offshoots of this sect, including apparently the most extreme of them all, the Sicari, whose name means something like “dagger-wieldersThese people sometimes even killed other Jews who disagreed with their view of how Roman rule had to be cast off by any means, as soon as possible. Becausethis was the group who lived and died at Masada.“The Scroll” talks about them extensively.

I have left this group until last because they are the stream of Jewish thought and practice from which all of us, Jews and Christians are the descendants. Sometimes it is hard for Christians to imagine that the first Christians came from this group, because Jesus criticizes them so harshly (Matt. 23:1-7 is one of the milder references), perhaps even more than the Sadducees. But everything we read in the New Testament about the method Jesus used to interpret Scripture and the way he engaged others in debate about it, is precisely the way the Pharisees believed was the way to go. For the Pharisees,  after the destruction of the Temple, when Jews sought new spiritual understanding, Scripture should not belong only to the Scribes, to the educated class. Everyone who goes to synagogue should be able to hear the words, be helped to understand them by teachers and preachers, and be able to respond if they disagreed. Perhaps the best example of this type of discourse is to be found in the abovementioned verses of Luke (4:14-28). Jesus reads a portion from the Prophets (the way we still do in synagogue in the Sabbath morning service today), in this case (Isaiah 61:1-2), and then comments on it, what today we would call the sermon.  Some people then begin commenting on Jesus’ words, first, apparently in a positive way, and then, with violent, uncontained anger.

This kind of challenge to Jesus’ words, appears elsewhere in the Gospels, one notable example being the query to Jesus as teacher that gave rise to the parable of the Good Samaritan.  Not only is teaching in this manner still part and parcel of the way we interpret Scripture, in Jewish tradition, challenging authority, one’s peers, debate and downright knock-down drag-out arguing, is part and parcel of Jewish culture.

To conclude this foray into Judaism’s ancient opposing sects, while I yearn for coexistence, I recognize that internal strife is part and parcel of Jewish culture. The eminent historian Prof. Yehuda Bauer said recently in a newspaper article: “Jewish culture is based on these internal conflicts…between the true prophets and the false prophets, in the splitting of the united kingdom into two rival kingdoms that fought each otherl in the disputes between Sadducees and Pharisees; between Hellenizers and Hasmoneias; between the religious establishment and the various Zeolots before the Great Revolt…The endless debates, from the Middle Ages to our own time, constitute the vitality of this people.”*