Flames of Faith and Freedom: Now that’s a Force to Be Reckoned With

The “graves of the Maccabees” are about as unlikely a place to find shared Judeo-Christian heritage as a Star Wars movie, but there it is

Now that I have your attention, I’d like to share with you something about fire that’s not the outer-space, cinematic, blockbuster kind. I want to tell you about a different kind of fire – the flames of the Hanukkah candles, which each night grow brighter and will reach their brightest light on Sunday night. 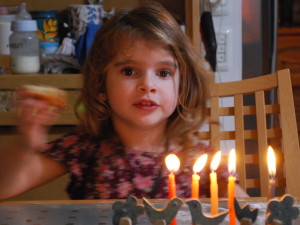 I learned recently that the first association of Hanukkah with fire is in 2 Maccabees 1:18 where it is called the “feast of tabernacles and of the fire” (KJV) and where the author traces a heavenly fire that “was given to us when Nehemias offered sacrifice” (v. 18), a fire that had been hidden and miraculously appeared.

I leave my interfaith reflections for the moment to share with you how I celebrated Hanukkah week. In addition to candle-lighting, gift-giving, dreidel-spinning and latkes-eating, I decided that for my required continuing education day to renew my Israel tour guide license, I’d join a trip to Maccabee country, only about an hour from where I live, to see the newly discovered tombs some like to call the “graves of the Maccabees.” What a treasure trove! Even my favorite subject – what our faiths have in common – was represented.

Our guide was Dr. Amit Re’em of the Israel Antiquities Authority, who lives in Modi’in, the modern city named for the home town of the famed Mattathias and his sons, first and foremost the iconic Judah the Maccabee.  As Re’em took us around Modi’in, regaling us with stories of antiquities on every hill and dale, he explained that Holy Land scholars have been on a hunt for the Hasmoneans (the dynastic name of the Maccabees) for over 150 years  To make a long story short (for more info see suggested reading at the end of this blog), Re’em and his colleagues were drawn, like French, British and Israeli archaeologists before them, to the site where the ancient village of el-Medyeh once stood. As it turns out, that site, called Horbat HaGardi, has a lot to recommend it as the authentic Hasmonean home town. And that’s despite the fact that a nearby burial site, Qubur al-Yahud (“the graves of the Jews”) – whose tombs, though really old, actually belonged to anonymous ancient pagans or early Christians – has meanwhile become the “official” spot. By the way, try saying the name el-Medyeh out loud; it sounds like Modi’in, which is another of several recommendations for its authenticity, as you’ll read below.

There’s an old tomb building at the site, where one Sheikh Garbawi (“the sheikh of the west”) is buried. In recent years, local devotees of Mattathias have utterly disregarded the Muslim origins of the sheikh; for them this is none other than the final resting place of the priestly paterfamilias of the Maccabees, and they have even installed a tombstone stating as much.

Part of the arched entryway to the tomb of Mattathias, a.k.a. Sheikh Garbawi. 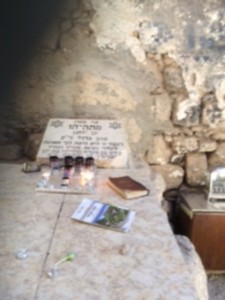 The tombstone with the words “Mattathias the high priest” and a dedication, in the Sheikh Garbawi tomb structure.

An ancient tomb, no matter who is believed to be buried there at any particular historical juncture, can indicate the ancient origins of a burial site’s sanctity. This, despite the occasional conversion from one religion to another inspired by regime change. In this case, another indication that something sacred going on here is an array of scary, hands-off-or-you’ll-die type legends, Re’em told us.

This is what 1 Maccabees has to say about the tomb: “Then sent Simon, and took the bones of Jonathan his brother, and buried them in Modi’in, the city of his fathers… Simon also built a monument upon the tomb… and raised it aloft for all to see, of hewn stone behind and before. Moreover he set up seven pyramids, one against another, for his father, and his mother, and his four brothers….about which he set great pillars, and upon the pillars he made all their armor for a perpetual memory, and by the armor ships carved, that they might be seen by all that sail on the sea” (I Macc. 13:25–30).

The July 20, 1870 edition of the London newspaper The Globe reported that based on earlier finds, the French scholar Victor Guerin had announced the discovery of  “a sepulchral vault two meters [about 6 feet] in length and one meter in width, and 70 centimeters [about 27 inches] deep. It was paved with mosaic work of red, black and white stone…Each chamber we know was surmounted by a pyramid and the place where these pyramids had been fitted into the rest of the building was still visible. It was surrounded by a portico resembling the peristyle of a Greek temple….”

By the time Re’em and his team got to the site a few years back, virtually none of these above-ground remains were left. But then, the excavation started…

Are these indeed the tombs of the Maccabees? Re’em told us, as he told local and foreign press after the discovery last summer, that he won’t go that far at this early stage. But in addition to similarities with the description 1 Maccabees – including clear signs of a magnificent building, a lofty location that could be seen from a distance, and the name of the site – at the bottom of one of the burials his team discovered, of all things, a mosaic cross. Never before, Re’em said, has a cross like this been found at the bottom of a tomb. And so – taken with all the other evidence – it seems that ancient Christians venerated these tombs as those of the Maccabees.

Now, why would they venerate the Maccabees? 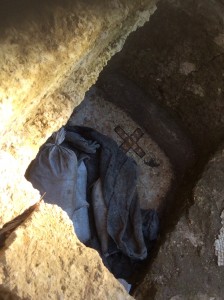 Seen from above, part of a mosaic cross. With a dramatic flourish, Re’em pulled aside the cloth you see at the bottom to reveal it to us.

Christian reverence for the Maccabees goes back a long way. For example, the famed fifth-century Madaba mosaic map considered it important enough to be illustrate and caption, as you can see in the part of the map I’ve included below.

Portion of the Madaba Map. Below the walled city of Jerusalem, the black arrow I’ve inserted points to the Greek words: MOΔΕΕΙΜ · Η ΝΥΝ ΜWΔΙΘΑ ˙ ΕΚ ΤΑΥΤΗC HCAN OI MAKKABAAIOI (“Modi’in, which is today Moditha; home of the Maccabees”).

Re’em explained to us that for Christians as well as Jews, the Maccabees symbolized victory in the war against idol worship and its cruel demands of monotheists. Now, remember the Elijah connection – the prophet who first brought back his own flock, kicking and screaming, so to speak, to the worship of the one God. So did Mattathias. His sons then fought valiantly to cast off the yoke of the Greeks, in what is often cited as the first recorded war for religious freedom. And there’s no better time than Hanukkah to remember that this is another shared value of our faiths whose flame must never be allowed to die, but only to grow greater, like the flames we kindle this week. 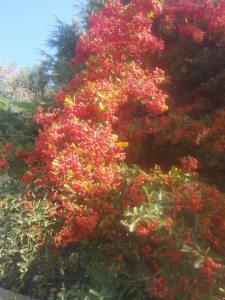 A “burning bush” (a firethorn, or pyracantha), near my home in Har Adar. Another fire connection for the season.

“The ‘Real Graves’ of the Maccabees?’ By Miriam Feinberg Vamosh and Ruth Schuster

Where is Modi’in? By Prof. Yoel Elitzur http://etzion.org.il/en/where-modiin

Last year on Hanukkah I shared thoughts on the heroine Hannah:

“Why do we really light candles on Hanukkah?” By Elon Gilad.

A Hanukkah Highlight on the Road to Emmaus 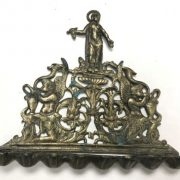