A Timber Tale for Tu B’Shevat

The first Tu B’Shevat I remember was in first-grade Sunday School at Har Sinai Temple in Trenton New Jersey, where I grew up. We were taught a simple Hebrew round whose only words were “Atzei Zeitim Omdim”  – meaning “olive trees are standing” – oh, and a lot of la-la-la (see under “want to know more” below to listen to the song*).  When Rabbi Rosenthal, the principal, came to our classroom to hear us, we sung our little hearts out. I don’t recall learning until I came to live in Israel that the original song, the composer of whose rhumba-like rhythm and melody is unknown, was a biblical verse – Exodus 26:15: Atzei Shittim Omdim,” which the King James Version renders “shittim trees standing.” Yes, that’s the unfortunate old English transliteration for acacia. Was that the reason we young religious school students were not taught the song with that word, transposing the less distracting zeitim, olives, instead?

Why did the King James Version transliterate “shittim” as the name of the wood used in the Ark of the Covenant and the Tabernacle? Most contemporary translations have moved to “acacia,” but as in several other cases, the KJV scholars may not have known exactly what tree was meant in the desert of the far-off Holy Land, so they opted to transliterate – shittim would have to do.

As a guide in Israel, when I’d show visitors acacia trees as we drove along the Dead Sea or through the Negev (and Sinai, back in the day), I’d remind them of the old translation “shittim wood.” My Bible-savvy travelers would recognize it, and it always drew smiles and nods.

Be that as it may, if we were to go with a single English-language reference to the song I found on the web says is “the version sung in the United States” – about olive trees – it would be difficult for me to avoid delving into the painful subject of why a few of our brethren in the Holy Land have taken to cutting down defenseless olive trees, breaking the biblical commandment against doing so (Deut. 20:19): “Are trees of the field human to withdraw before you into the besieged city?” (JPS, 1985). So for now, I’ll stick with the original, “acacia trees standing.”

Why do you think the Israelites built the Tabernacle out of acacia wood? – I’d ask my budding biblical botanists on tour through the wilderness.  Someone would always volunteer the answer – it’s the only tree out there! Sounds good, but there’s a problem: Of the approximately 700 species of acacia, the one from which the wooden parts of the Tabernacle were probably made, we’re told, doesn’t grow in Sinai – the trunks of the acacias that grew there were apparently too short or not straight enough.

So where did the Israelites get the wood to build the Tabernacle in Sinai? The late second-century sage R. Levi ben Hiyya believed that they had stored away the acacias for the Tabernacle “…since the days of Jacob our father. This is what is written: ‘And every man who was there found with him acacia wood (Exod. 35:24). It is not written ‘who found acacia wood’; rather, [it refers to] that which was found with him from the beginning.” R. Levi goes on to explain that the acacias for the Tabernacle were originally felled in Magdala in the Galilee!

From there, they were taken to Egypt and preserved until their long, straight trunks were needed for the Tabernacle. The Talmudic tractate Sukkah (45b) explains the verse thus: “Acacia wood standing, meaning that they stand forever and for all time and will yet be revealed and utilized again.”

Christian tradition connects the acacia with a very different species – perhaps more familiar (mentioned some 72 times in the Bible to the acacia’s 12). In a picturesque valley in western Jerusalem is the venerable Monastery of the Cross, built, legend says, on the site where a miraculous tree grew. That tree was said to be a literal interpretation of Isaiah 41:19: “I will put in the desert the cedar and the acacia, the myrtle and the olive. I will set junipers in the wasteland, the fir and the cypress together.” Myriad interpretations – and various translations – have been given to the species of trees in question. The tradition of the monastery says that Abraham gave Lot three trees and miraculously, they became one. When building the Temple of Solomon the tree was cut down but could not be used by the builders because it kept changing shape. According to the legend, it was eventually used to make the cross of Jesus.

How did an Acacia Turn into A Cedar?

The ancient sages continued to wrestle with the identity of the shittim trees; some, like the medieval scholar Rashi, even saw them as a species of cedar – which grows neither in the desert nor the lowlands, but only at about 3,000 feet above sea level. How did these two species of trees, so different in their appearance and habitat, become so closely associated? Some scholars believe that because there was so much cedar wood in Solomon’s Temple, for continuity’s sake, the sages wanted to imagine cedar wood used in the Tabernacle as well.

And what about the origins of this “Israeli arbor day,” as it’s sometimes called? Tu B’Shevat, the 15th of the Hebrew month of Shevat, started out as the “birthday of the trees” – a date after the height of winter, when trees began to bud, and, from the fourth year after planting, fruit could be harvested for the first time. Later, Tu B’Shevat gained mystical significance and special meanings to each fruit eaten at a special meal, the Tu B’Shevat Seder. By the early twentieth century, the Jewish pioneers in the Holy Land had adopted that date as a time for planting trees in a land much of which they saw as barren – that must have been the origin of the song I sang as a child in Sunday School in the late 1950s. In Israel, tree-planting has long been the hallmark of the holiday, and ecology is now a prime subject on that day. Above all, it’s a day of joy and celebration of new life – and not by coincidence, it’s the day we chose for our wedding. Happy 41st anniversary, Arik.

*Listen here to a traditional version of Atzei Shittim Omdim 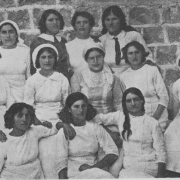