What is Baseless Hatred? The Story of Kamza and Bar Kamza

The story you are about to read appears in two ancient Jewish sources: Lamentations Rabbah (4:3) and in the Babylonian Talmud (Tractate Gittin 55b-56a). That talmudic tractate discusses divorce.*Indeed, it has been pointed out that the period in Jewish history described in the story of Kamza and Bar Kamza – around the time of the destruction of the Temple – can be considered as one of “divorce” –one in which the Jewish people’s core concept of community was threatened from within and without, and in which the Romans, by destroying the Temple, attempted to divorce the Jews from their spiritual center on earth, the Jerusalem Temple and their holy city.

This story has many morals. Most significantly for modern times, the story is often quoted as the prime example of “baseless hatred” which ancient Jewish sages said was the prime reason for the destruction of the Temple.  (Talmud, tractate Yoma, 9b).

This, then, is the story: 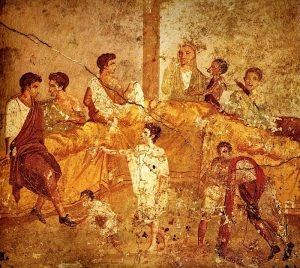 There were two men living in Jerusalem in the first century CE, one named Kamza and the other named Bar Kamza. The names are clearly very similar. (“Bar” by the way, means “son of” in Aramaic.) When the story opens we know nothing about these two men except that Kamza was a friend of a wealthy man in Jerusalem. We also are told little about that man, except that his rigid, unforgiving nature led to disaster. Perhaps that right there is all we need to know to impart the story’s lesson.

But by mistake, the servant went to Bar Kamza’s house instead of Kamza’s! To make matters worse, Bar Kamza never questioned the invitation from his enemy, but showed up at the wealthy man’s door. Who knows why – perhaps he thought the invitation meant reconciliation was in the offing. In any case, the wealthy host was enraged when he discovered that his sworn enemy Bar Kamza was at his door and about to crash his party.

“Be gone!” he bellowed to Bar Kamza.But Bar Kamza begged to be allowed in, just to save face. He even offers to pay for the banquet!But the wealthy man refused and physically pushed Bar Kamza out the door. Now, there were several sages at Kamza’s table – men who knew full well that in Jewish tradition, humiliating a person is said to be as bad as murdering that person.

Fuming, the humiliated Bar Kamza, plans his revenge. He went to the Roman governor and lied that the Jews were eating the sacrifices the Romans had been sending to the Jerusalem Temple for sacrifice, and were substituting animals that were not ritually proper for sacrifice inferior animal on the altar.

But the governor did not believe Bar Kamza. And so, as his anger mounted, he decided to entrap his fellow Jews.This is what he did: “If you do not believe me, send an officer and some sacrificial animals with me, and you will immediately know that I am not a liar.”According to the story, Bar Kamza himself accompanied the Roman officer and the animals to Jerusalem and at night, while the officer was asleep, Bar Kamza secretly made all the animals “blemished” (ritually impure). According to Jewish law this meant they could not be offered to God as a sacrifice. When the animals reached the Temple, the priest in charge saw that they were blemished and indeed, he substituted others for them. The king’s official, watching closely, asked the priest why the animals he had brought in the name of the Roman emperor were not being sacrificed. The priest tried a delay tactic: ‘‘I will do so to-morrow,” he told the Roman. 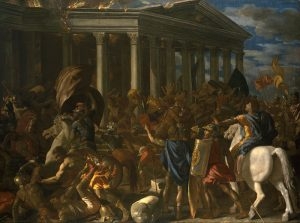 Destruction of the Temple, by Nicolas Puossin, Wikipedia

After this happened three days in a row, the officer reported to the emperor that Bar Kamza had told him the truth.  That, according to the story was all the emperor had to hear. He then sent his legions to Jerusalem to destroy the Temple.

“Hence the popular saying,” goes the version in Lamentations Rabbah: “Because of the difference between [the names] Kamza and Bar Kamza was  was the Temple destroyed.’”

But of course, the destruction of Temple was due to more than just a three-letter difference between the names of two of the protagonists.

In the Lamentations Rabbah version of the story, one sage, Rabbi Jose said: “The meekness of Zechariah b. Abkulas burnt the Temple.” By this the sages meant that this rabbi, was present and the feast, could have exerted his moral authority to stop the host from treating Bar Kamza so meanly, but he chose not to intervene.

The other version of the story, in the Talmudic Tractate Gittin presents it to explain a verse in Proverbs, 28:14: “Happy is the man who is anxious always, but he who hardens his heart falls into misfortune.” The fames late 11th-century Jewish scholar Rashi tells us that the outcome of the story of Kamza and Bar Kamza teaches us that being “anxious always” should means –always be aware of what may be the ultimate outcome of your decisions and actions.

*The word get, which means divorce document, is related to the Aramaic word gittin. This word appears frequently in The Scroll because this very type of document is key to the plot.

What is the Talmud?
1 reply