In the craziness that threatens to engulf us at any given moment, I leave the macro of our political maelstrom to wiser thinkers, and the micro of medical challenges faced by Arik and other loved ones to the experts and to the higher power that guides their hands. For a little peace of mind in the midst of it all, I flee briefly to the natural world no further away than the edges of my Judean Hills hometown. In previous blogs I introduced you to a cucumber that spits to survive and to the symbiotic Atlantic terebinth. This time, I want to tell you about a peripatetic little neighbor of mine that you see in this picture. It’s called the white wagtail (Motacilla alba). Read on, there’s a legend in it for you, too. 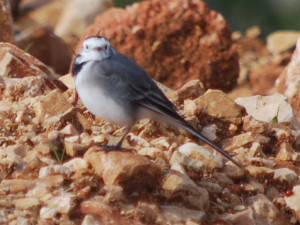 I found the particular wagtail and his mate darting around the bushes they call home on the edge of my little community of Har Adar, just across from the skating park that overlooks the ancient Canaanite city of Hakfira, the biblical Chephirah (there aren’t too many places in the world where a skating park overlooks an ancient Canaanite city, now, are there?). Just beyond Hakfira, by the way, I can see the Ayalon Valley on the edge of which – don’t blink, here’s the Hanukkah connection – at Emmaus, Judah Maccabee defeated the Syrian Greeks (1 Mac. 4:1-25). 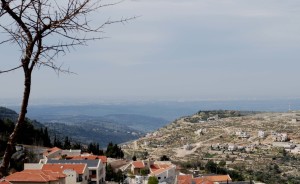 The Canaanite city of Hakfira (at top left of hill in center) with Qatana on the slope and the Ayalon Valley in the distance. In the foreground: Har Adar. Photo: Miriam Feinberg Vamosh

But back to our wagtail. This species is well established around the world and very common in Israel, except in the desert. In fact, Israeli schoolchildren learn to recognize it as one of the signs that winter is here, because these tufted tweeters fly in around November and abide with us until March. And while we’re on the subject of their tweet –  to me it sounds something like what you get when you let the air out of a balloon by the neck, very, very slowly (which you might do, once, to amuse grandchildren up to a certain age).

Winging their way to us from points north, each wagtail pair picks a territory and guards it zealously. In fact, because they are so fiercely protective of their small dominion, a wagtail can sometimes be seen doing battle against its own reflection in a car or house window.* Yes indeed, we know a lot about that kind of thing in our part of the world.

Of the 227 bird species the experts say nest in Israel, 143 increased their size and distribution in the 20th century.  The veteran Israeli ornithologist Dr. Uzi Paz just published a new book in which he focuses on several avian species that seem to be thriving due to human presence. In answer to my email query as to whether the white wagtail was among them, Paz responded that this was not his impression, but it was certainly possible. That’s enough for me; I love these little guys.

The wagtail got its name in English because when it’s hopping around searching for insects to eat, it bobs its tail up and down like some old-time telegraph operator beating out an urgent message. In Hebrew it’s called nahlieli – a name that relates to its habitat rather than its body language. The word nahlieli comes from the word nahal, which means stream. Interestingly, it was the famous Jewish writer Mendele Mocher Sforim, all the way back in 1862, who first named the nahlieli, in his book about nature called Toldot Hateva. 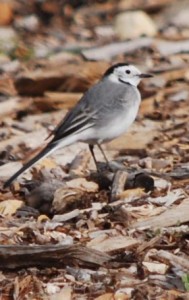 And now for the tale: Nehama and her Mama

A story is told of a little white wagtail named Nehama who lived in Kiryat Ye’arim on the western border of the Tribe of Judah (Josh. 10:9; 1 Sam. 6:21; now Abu Gosh), with her parents and seven brothers and sisters. One day, while Nehama’s mama was busy weaving twigs into a new nest for the next round of family, and her father looked the other way for just a second, little Nehama fledged. She flew over Mount Haruah and over the canyon of Nahal Kfira, and landed in Chephirah (Josh. 9:17, Nehemiah 7:29; now Qatana). But right then, clouds blew in from the west, covered the sky and dropped so much rain that before long Nahal Kfira was a ranging stream. Nehama Wagtail, far from the warmth and comfort of her nest, cried out in terror. Her mother heard her, and immediately took off over the narrow, frothing stream. Her tiny wings tired as they beat against the wind and rain, but with the last of her strength she reached the other side, where she was reunited with her daughter. Nehama’s mama stayed by her side for as long as it took to teach her daughter everything she needed to know to build her own nest, which she did that very year and for many years thereafter.

This story was told to me by…me.  And yes, the similarity to a tale about a certain Willie Wagtail is not coincidental. However, the original ending is rather gruesome and we have enough of those endings around here, so I like my version better and I hope you do, too.

For more of my short stories, all with happy endings and biblical associations, see my book Teach it to Your Children: How Kids Lived in Bible Days. 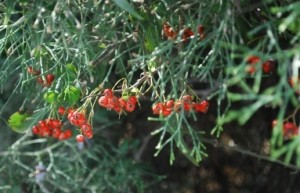 Here’s a sprig of pyracantha in its natural setting  near my Judean Hills home, together with my wishes for a wonderful holiday to you and yours.
Photo: Miriam Feinberg Vamosh