The Finds that Tie Us

Within the space of a few weeks highway construction and a family’s living room renovations have brought to light two ancient pools of faith in the Judean Mountains that reveal love of heritage – and kindred traditions.

I never get tired of it – that the ordinary magnificence of daily life thousands of years ago lives down the road from me.  This time, it’s a newly discovered Jewish ritual bath on a mountain of Judah and a baptistery in a valley over the horizon, which remind us of the people who walked here before us;  people who shared – and still share – more than we sometimes imagine. 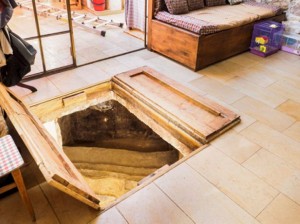 Mikveh discovered under an Ein Karem living room. Photo by Assaf Peretz, courtesy of the IAA

According to tradition, Ein Karem is the “village of Judah” where Mary came to visit her cousin Elizabeth when both were pregnant (Luke 1:29–35).  You may recall spending time with me in the tranquil courtyard of Ein Karem’s Church of the Visitation. There, thanks to what I learned years ago from Sister Joan Cook, I love to explore the Magnificat (Luke 1: 46–55), together with Hannah’s praise song (1 Sam. 2:1–10) delving into the ways the lives of these women link the Old Testament and the New. 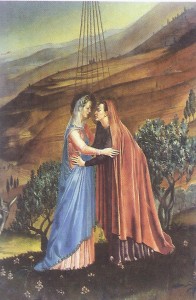 Mary and Elizabeth, from a painting in the Church of the Visitation, Ein Karem.

It was from Ein Karem last week that media reports emerged of a family renovating their home and finding a 2,000-year-old ritual bath – beneath their living room! Experts say the large rock-hewn miqveh was made in careful accordance with Jewish laws governing water purification. Among the finds inside were pottery vessels dating to the time of the Second Temple (first century CE) and signs of a fire that may be have occurred during the Great Revolt (66-70 CE) . Stone vessels, of the type known to have been used particularly by Jews, were also found.

I was impressed with the way the Israel Antiquities Authority’s Jerusalem district archaeologist Amit Re’em was quoted on the radio news report I heard about the find. He said it was more proof that the village was a Jewish community 2,000 years ago, and he reminded Israeli listeners how important Ein Karem was in Christian tradition as the birthplace of John the Baptist, connecting our traditions as they should be connected.

The owners of the house told the press that their strong feeling of the historic value of what they had found and their civic duty trumped misgivings about what would happen after they reported the find. (I wonder if they feared they would have to make their house a national park!) And so they contacted the Israel Antiquities Authority, and, as they were quoted in an IAA statement:  “Representatives of the IAA arrived and together we cleaned the miqwe. To our joy and indeed to our surprise, we found them to be worthy partners in this fascinating journey.”

Miqveh on the mountain, baptistery in the valley, just another day at the IAA

Ritual immersion goes back to the Bible (in Leviticus and in Mark 7:4 for example; for a more symbolic take, see Psalms 26:6) and came into Christianity as baptism, as you may have learned in Bible study. Many such installations began as natural springs, such as Ein Karem (“spring of the vineyard”) and the layer spring, Ain Naqa’a (“spring of the pool”*),  next to where the baptistery was found. And that brings me to the other find I want to share with you. It’s also a water purification installation – this time, a baptistery – discovered during highway construction in a valley just beyond my own Judean Mountains home. I drive through the cloud of construction dust at that interchange at least three times a week, and one day some weeks ago I noticed that work had stopped, a few storage containers had been brought there, and the Israel Antiquities Authority flag was flying. The next thing I knew, the IAA had announced that a church had been discovered dating back to Byzantine times (fourth–seventh centuries).  Among the finds the IAA salvage dig unearthed was a fine cross-shaped baptistery in one corner of the church, surrounded by a mosaic floor. 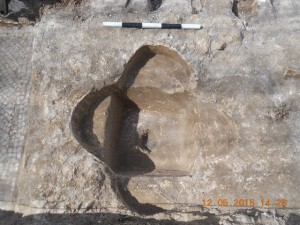 Oil lamps, coins, glass vessels and abalone shells were all found here; archaeologists believe it was a stop for pilgrims making their way between Jerusalem and the coastal plain along “highway 1” – as it was some 15 centuries ago.  The road went through what is now my neighboring town of Abu Ghosh, where Roman-period remains include a milestone, now incorporated into an outer wall of one of the most beautiful churches in the country, marking (one of the sites of) Emmaus (Luke 24:13–35).

Before the baptistery was covered up to preserve it, the IAA took people on tours to see it, including a special trip for members of our community of Har Adar.

It’s finds like these, one beneath a modern home attesting to Jewish water immersion rites in the hometown of John the Baptist, and the other alongside an ancient-modern highway – that recall and reinforce bonds bridging faith and time. 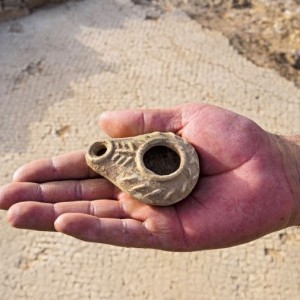 Oil lamp found by IAA archaeologists in the baptistery near Abu Ghosh. Photo: Assaf Peretz, courtesy of the IAA.