In memory of my late mother-in-law, Tamar Vamosh, a Holocaust survivor, who loved flowers, life and The Mikado 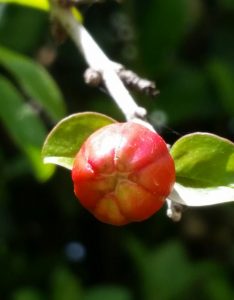 A pomegranate bud in my garden.

I’d like to take a break in my series on the women in King David’s life and today, Holocaust Memorial Day, when sorrow over the past and worry over the future plague so many, turn to thoughts of beauty and hope spurred by biblical springtime. Such thoughts were the “weapons” that my late mother-in-law, Tamar, a Holocaust survivor, wielded to win her battle to live and love after the Holocaust had robbed her of so much.

I’d like to share today how Scripture’s original Hebrew deepens our understanding of springtime in the Holy Land.  Passover is behind us, and we’ve begun the seven-week period before Pentecost (Lev. 23:15–16) known as “the counting of the Omer.”  This was and still can be a fearful time for Holy Land farmers. Most of the rainy season is over. But a downpour, not to mention a hailstorm, could destroy ripening grain (Exod. 9:18), while a sudden searing wind from the desert was the mortal enemy of tiny olive blossoms and budding grapes (Job. 15:33). Farmers sighed in relief as each day was counted toward the calming of the skies and a successful harvest (omer means “sheaf” in Hebrew). 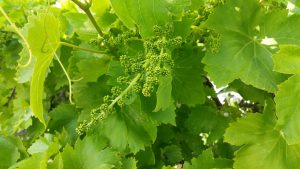 Grape buds on our vine, planted 30 years ago by Abu Ghrazi, from the nearby Palestinian village of Bidu, as a gift from his own vineyard.

As my husband Arik and I strolled last week along a forest path near my community of Har Adar, we saw some beautiful flowers blossoming. “How about that,” I remarked: “There are the flowers that the Song of Songs talks about.”

“What flowers,” asked my better half.

Arik is a native-born Israeli. He and I, a native-born member of the Trentonite Tribe of New Jersey, communicate in both Hebrew and English, often in the same sentence, in a language alternatively known as Heblish or Engbrew. But when it comes to the Bible, Arik relies on the original Hebrew, and in that regard has been my teacher for 37 years now. Hence, his question.

“Well, you know, I pontificated confidently, “in the Song of Songs, it says: ‘For lo, the winter is passed/The rain is over and gone/The flowers appear on the earth/and the voice of the turtle is heard in our land” (Song of Songs 2:11–12).

After a spirited digression to explain to Arik what “Lo,” means, not to mention “the voice of the turtle,” we got back to our subject: “It doesn’t mean wildflowers,” Arik corrected me, “it means fruit-tree buds.” We immediately turned to The Oracle (Google) to compare the Hebrew and English of the verse in question. Arik was right, of course. The word in Hebrew is nitzanim, buds. But couldn’t they be wildflower buds, I persisted? 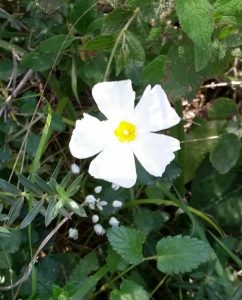 Probably not, I realized as we continued down the path. Back in New Jersey it was “April showers bring May flowers.” The King James translators must had the same idea in mind, picturing the Holy Land spring based on their experience of the English countryside. But by April in Israel, we hope and pray the heavy showers are over and thus: “the rains are over and gone.” The colorful tapestries of wildflowers – cyclamens and anemones among them – which had appeared with the first rains of fall (the Bible’s “former rains,” Joel 2:23) – have wilted and dried. They’ve been “thrown into the furnace” (Matthew 6:30), that is, burned under the Holy Land sun. 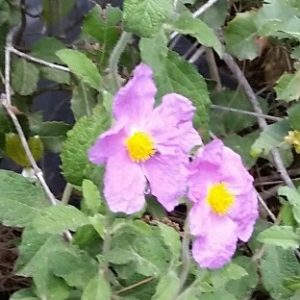 A few flowers still come out now, like the blushing pink or white rock rose, mustard plants that create brilliant yellow carpets, and the tiny, droplet-like flower known locally as Maccabee’s blood. In contrast, the verse in Song of Songs is telling us about the budding fruit trees like the pomegranate and the olive, on which people’s livelihood depended in ancient times.

Flowers or buds, fruit trees or wild blooms, Hebrew or English, springtime hope and renewal can be common ground wherever we live. In this case, I can’t help recalling, of all things, the words of The Mikado’s Nanki-Poo: “That’s what we mean when we say that a thing/is welcome as flowers that bloom in the spring.” 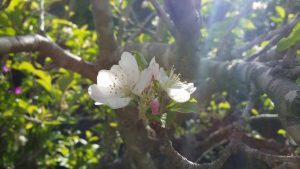 An apple blossom from a tree in our front yard, which daughter Maya planted under a rock as a child – just to see what would happen! Apples are not indigenous in the Holy Land (“apple” means something else in the Bible, wouldn’t you know), but I couldn’t resist sharing.

For more about  Hebrew and the agricultural cycle in the Holy Land, see:

Miriam Feinberg Vamosh, “Where the Language Meets the Land .”