Solemn Assembly Time is Over – Get Your Umbrellas Ready 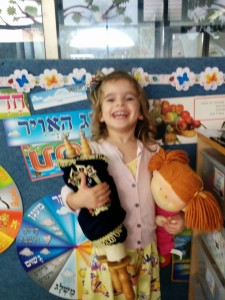 One of my earliest memories at Har Sinai Temple Sunday School in Trenton, New Jersey, is Simchat Torah. That’s the holiday that we celebrated last week, closing the week-long Feast of Tabernacles – and our High Holy Day season altogether. As a child, the holiday was inseparable from the fun and excitement of making Simchat Torah flags. We would intently transform Elmer’s Glue and multicolored glitter (with varying skills at getting the glitter within the lines) into a salient a symbol of our joy. Then, in the sanctuary during the service, we children waved our handiwork as the Torah scrolls were taken out of the Holy Ark. 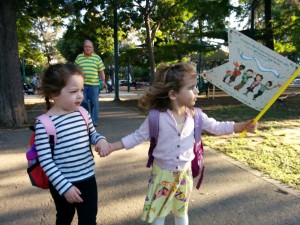 As you delve into Jewish traditions in your search to better understanding Scripture, I’m sure you will enjoy learning about the joys of Simchat Torah. This is when the cycle of Torah reading is renewed at the holiday service with two Torah scrolls taken out of the Holy Ark so that the chanting of the last verse of Deuteronomy can be immediately followed by the first verse of Genesis.

But looking back to the origins of the holiday, we find that Simchat Torah as we know it first came into its own only in medieval times. What the Bible calls a day of “solemn rest” (Lev.  23:39) and “solemn assembly” (Num. 29:35; Neh. 8:18; 2 Chron. 7:9) because it was the end of one of the three pilgrimage festivals, may have been the best time to gather to bid friends and loved ones farewell, as everyone got ready to depart for far-flung homes after a week of celebration together in Jerusalem.

That seems to be the point of the description in one ancient source, Tosefta Sukkah (4. 17): “On the eighth day the people were sent off and they blessed the king and went to their tents happy with goodly hearts for all the goodness that God did for David and his people Israel.”

The rains of blessing

“Be glad then, ye children of Zion, and rejoice in the LORD your God; for He giveth you the former rain in just measure, and He causeth to come down for you the rain, the former rain and the latter rain, at the first” (Joel 2:23).

Check out my article “The ‘Fourbears’ of Jewish Dispute and That’s no Typo,” where you can learn about the Pharisees as Judaism’s teachers and worship leaders after the destruction of the Second Temple in Jerusalem. It was at this time that the Amidah prayer was composed, which, among its 18 blessings, includes one describing the Almighty as: “He that causes the wind to blow and the rain to descend.”

Notice the wording of the prayer. This is not a “prayer for rain” as we might first imagine,  say,  “Dear Almighty, please make it rain already, Amen.” Rather, it’s one that acknowledges the climate in the Holy Land – a rainless summer followed (hopefully) by enough winter precipitation to bring everything alive. That’s why our sages implanted in this prayer two versions, which they could switch out in the relevant season. One, which we recite starting at Passover when the dry season begins, calls on the Creator almost exactly like the prayer above, with one important difference: instead of mentioning rain, we settle for whatever the season brings, and so in this case the blessing calls on God as “He that causes the dew to fall.”

If you’ve been on a guided tour of Israel, you’ve probably seen one of the beautiful ancient synagogue mosaics that illustrate the passage of time by means of a zodiac wheel and the four seasons, for example in Tiberias, Beth Alpha, or Sepphoris.

The sixth-century Ein Gedi Synagogue, in Ein Gedi National Park near the Dead Sea, is another place to see a fascinating ancient synagogue mosaic. (Well, a copy of the ancient mosaic, the original is at the Rockefeller Museum in Jerusalem.)  The most talked-about aspect of this archaeological and artistic wonder is its warning against revealing the “secret of the city” (a story for another time). This mosaic also cites the months of the year and even the signs of the Zodiac – but without the pictures we know from other synagogues, such as the one in Tiberias you see here. What the Ein Gedi synagogue does have, unusually, is a list of the biblical ancestors of the human race according to 1 Chron. 1:1-4.

There seems to be a very particular reason the Ein Gedi congregation wrote the inscription this way – and it has to do with respect for God’s plan for the cycle of the year. Too little or too much rain can be life-threatening every year anew.  The Ein Gedi congregation, some 1,800 years ago, may have formulated their mosaic inscription this way to call on beloved biblical ancestors and on God, right in the midst of their listing of the seasons, so that: “While the earth remaineth, seedtime and harvest, and cold and heat, and summer and winter, and day and night shall not cease” (Gen. 8:21–22). *

What an excellent verse with which to end our High Holy Day season and to launch into autumn and the blessed rains of winter that lie ahead.