Pomegranates and the Personal

I love pomegranates. I love looking at them – on the tree and the table, the way the tangy juice, bursts out of the seeds when I spoon them into my mouth. I even love extracting the seeds from the fruit, which I now do with the help of a cool little kitchen utensil invented by an Israeli lady who live on a farm in the Golan Heights.  You can see that utensil in the photo here, next to a little basket of the fruit a neighbor brought over. That particular neighborly offering had special significance for my family; read on and you’ll see why. 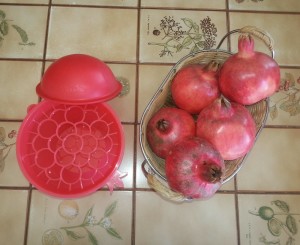 Pomegranates are one of the quintessential fall fruits in the Holy Land, and so its beauty has become a symbol of our High Holy Days that occur in this season. Solomon compared the temples of a beautiful woman “behind the veil” to two halves of a pomegranate (Song of Songs 6:7). The crown-shaped top of the pomegranate reminded our ancient sages of a crown, and so it became symbolic of the Five Books of Moses, the Torah, which is considered our “crown of wisdom.” To describe someone who does good deeds all the time, the sages said that such a person was “as full of good deeds as a pomegranate has seeds,” an expression we still use today in modern Hebrew.

Now for the personal angle – the basket of pomegranates. The pomegranate tree you see in the background is a photo I took as I noticed it hanging heavy with fruit from a neighbor’s garden into the street when I was talking a walk.

I actually never met these neighbors, and when we finally did cross paths, it was not over something good. This son of these neighbors smashed into my husband Arik’s car in May, leaving Arik still bedridden and struggling to recover. His 84-year-old mother was also in the car and was seriously injured.

Our whole family had been expending a great deal of energy being angry not only at the young man whom we understand caused the accident, but also at his family. The parents had made a few attempts to meet with us, the mom delivered a cake more than once, but we rejected their overtures. The other day the mom came by, Arik was in bed as usual, and when Lea, our caregiver opened the door, the mom handed her the basket of fruit and said just two words: “only health.”

When I came home, spotted the basket of fruit and Lea told me who had brought it, something moved. In the spirit of the High Holy Day season, which begins on the New Year and culminates after the “Ten Days of Repentance” with Yom Kippur, the Day of Atonement, I recall a bit of our sages’ wisdom that I had been preaching but not practicing: “For transgressions that are between man and God the Day of Atonement effects atonement, but for transgressions that are between a man and his fellow, the Day of Atonement  effects atonement only if he has appeased his fellow” (Mishna, Yoma 8, 9). The idea here is that this is a special time to ask others for forgiveness. That basket of pomegranates led me to realize that this mom had been trying to do that very thing since the beginning, and I could not accept it.  As far as the parents go, I’m going to try and put myself in their shoes and think about them differently. Matthew 6:14–18 talks about those who are being asked to forgive – that would be my family in this case – doing their part as well. Perhaps when the sages did not broach this part of the equation in their wisdom, they assumed that everyone who asks for forgiveness will indeed  “appease his fellow” and that person, now appeased, will automatically be in a forgiving mood. My work over this “holiday of the clean slate” is to move ahead on a journey to forgiveness. It feels good to have started. 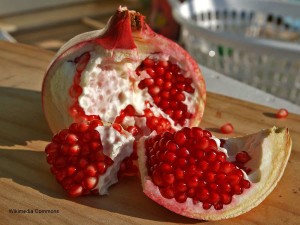 Read more about pomegranates in my book, Food at the Time of the Bible: From Adam’s Apple to the Last Supper.