Lifeline from the Grave

Our recent Purim celebration drew my thoughts to that other biblical woman with a warning for an ancient king: Hulda, teacher and prophetess. This is the story of her tomb, which she shares with two alter-egos from across the religious/ethnic divide.

“Don’t’ worry,” the service person who gave me my new cellphone told me. “All your numbers are in there.” A prophetess, she wasn’t: Virtually all of them had evaporated. Among the few that remained: my shorthand listing of  “Mhmd Hulda’s  tomb crtker.” Whew! That meant I could still call Hulda’s tomb, and Hulda’s tomb could call me back to confirm. Well, not in the creepy sense, like poor Elva Keen in Twilight Zone’s 1964 segment, “Night Call.”

Elva Keen gets a call from the grave, but not Hulda’s…like I can. (Photo: Wikipedia)

The phone number from the grave in this case belongs to Mohammed, the guard who’s got the key to Hulda’s tomb. You can usually find him at the Dome of the Ascension, the venerable Christian holy place next door, now abutted by a mosque. In fact, that’s part of what I want to share with you here: Try running down the list of sites in the Holy Land that have been or are venerated by the believers of one religion – or sect of the same religion – and are now zealously guarded by another. It’s quite a good “theory of everything” when it comes down to grasping the complexities of our relationship across the ethnic/religious divide. At the end of this article is a partial list of these sites – please feel free to add to it! But back to the prophetess.

A time of major regime change in the Fertile Crescent finds King Josiah purging the land of Idol worship. A “scroll of the teaching” has been found; the king wants to know what’s in it. The star  prophet of the time, Jeremiah, is apparently out of town, but Hulda, wife of Shallum son of Hope (Tikvah), one of the king’s courtiers (and, the sages say, Jeremiah’s cousin), is available and brought to court.

Hulda the Prophetess explaining the scroll to Josiah, rendering of a painting by Mantegna.

Hulda, whom the medieval Jewish commentator Rashi gleans from the Bible was a teacher, gives Josiah some really bad news for the nation and then softens the blow with some hope for him personally – albeit “from the grave” (2 Kings 22:14–20;  2 Chron. 34: 22–28).

Hulda’s tomb may have been located within Jerusalem at one point and later removed, for biblical reasons. In any case, by the Middle Ages, Jewish pilgrims write that they visited Hulda’s tomb at the top of the Mount of Olives – apparently the same place you’ll find it if you call Mohammed the guard for an appointment. Rabbi Moshe Basulo, who visited Jerusalem in 1522, writes that the tomb was guarded by a Muslim, whom one would pay for oil to light a memorial lamp. Some things never change (or almost never; nowadays there’s no lamp-lighting).

Not everyone was enthusiastic about visits to Hulda’s tomb. In the early nineteenth century, Rabbi Yehosaf Schartz wrote: “And now the hearer will hear and the viewer will see a wondrous thing: How a big mistake, a lie and a deceit and everything is in the hands of the masses of our people to say and believe that there is the grave of Hulda the Prophetess…and now, dear reader. Does the knowledgeable and understanding heart not pain over this thing that Israel goes to worship at a foreign tomb, saying that it is the tomb of the righteous woman Hulda the Prophetess, may we be protected through her.”*

Now that’s what I call a party-pooper.

When you visit the tomb, you’ll descend a steep flight of stone stairs to the cenotaph – the tomb marker – and see that it’s in a niche up against a stone wall. An ancient tradition says that if you could walk all the way around the tomb, you’d earn a special blessing.

Obviously the larger you are, the harder this is. Zev Vilnay writes that the guard at the tomb in his day told him:  how “he once saw with his own eyes how an overweight woman tried to go around the tomb and reached a point where she could go neither backward or forward. She cried out ‘Mother Hulda, save me.’ Immediately she was relieved and went around the tomb with no difficulty. That is a sign that the great righteous woman was in her place in Paradise and Allah knows the truth.”** 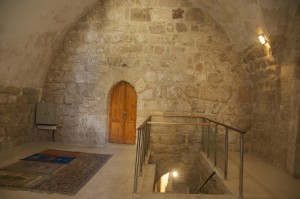 The first floor of Hulda’s Tomb. To the right of the prayer rugs, ancient steps lead down to the tomb. Photo: Ana Vargas.

To Christians, this very same tomb is occupied by St. Pelagia, a fifth-century actress and singer from Antioch known for her great beauty. Unfortunately, back in the day, that profession would get you ousted from any self-respecting salon and you’d have to endure a variety of epithets I’ll leave to your imagination. In any case, Pelagia, at the behest of her bishop, St. Nonnus, left her old life behind, disguised herself as a man and came to Jerusalem where she lived alone in a monastic cell and died in 457 CE.

St. Pelagia among the courtesans, with St. Nonnus praying for her, 14th-century manuscript. Photo: Wikimedia commons.

Guess what? the squeezing tradition made it across the religious divide: Christian visitors paying their respects to St. Pelagia wrote that managing to circumnavigate even the narrow back of the tomb would get you a ticket to Paradise. So here’s another quiz question for readers steeped in Jerusalem lore: Name two other places where squeezing through a narrow place ensures you Paradise (answer at the end).

In Muslim tradition, this is the tomb of Sit’ Raba’a al-Aduwiyyeh. She was born a slave in Basra, Iraq, and according to the story, when her master saw a golden aura surrounding her as she prayed, he decided to free her. She rose to fame as a sufi, a mystic in the Islamic tradition, and is said to have written love poetry to God, whom she called “my hope, my tranquility, my joy.” *** She died in 815 CE. (A mosque by that name hit the news during the Egyptian uprising against Mohammed Mursi, when his supporters took shelter there. But I digress. Or not.)

Husband Arik (who’s finally getting well, we hope) has a new home-visit nurse, a young man named Jihad, who is a born-and-bred Jerusalemite. Jihad told me he’s never been to the tomb, but he is very familiar from his childhood with the stories of Sit’ Raba’a as a healer and a performer of good deeds. Jihad and I discussed the apparent proliferation of Sit’ Raba’a tombs throughout the Arab world, and, as he put away the bandages and washed up after treating Arik, we agreed that this is because the world is hungry for righteousness.

So where can the story of Hulda’s tomb take us? The Bible says no one knows Moses’ burial site (Deut. 34:6–7), ostensibly, we are taught, so it would not become a focus of worship. The following legend regarding that issue might give us a path: “The Roman emperor even sent two army units, charging them:  “Go and see where Moses is buried.”  They went and stood up above and saw it down below; then they went down below and saw it above.  So, they split up, half above and have below; those above saw it when they looked down, and those below saw it when they looked up.  Hence it is said, ‘no one knows his burial place'” (Sifrei Deuteronomy 357).

There are ardent seekers of righteousness and justice among all humanity. We  split, splice, slice and dice ourselves into our own tiny human slots (or allow it to be done to us); but Hulda’s tomb might show we just can’t help having much more in common than we sometimes realize. So let’s not forget the “hope” in Hulda’s name. 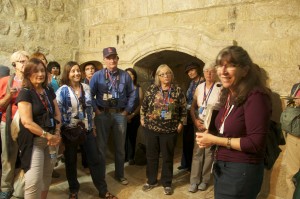 I like to tell the story you read here on site at Hulda’s Tomb. This 2013 Women of the Bible tour, with Logos Bible Study led by Dr. Bill Creasy, made  time to visit. Photo: Ana Vargas.

Two other narrow places the faithful try to squeeze through for miracles: The columns under the shrine of the hair of the prophet’s beard inside the Dome of the Rock, and Mary’s Tomb in the Kidron Valley. Can you add any?

Read more about Hulda in Women at the Time of the Bible. 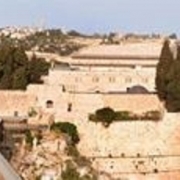 Flashback and Flashpoint: What's Going on with the Temple Mount?
2 replies