Are Your Kids and Grands Afraid of Spiders?  Tell Them What King David Thought

Spiders are not exactly way up there on my list with raindrops on roses or whiskers on kittens. But every spring morning I take a walk, I love the sight of their webs glistening with the morning dew on the ornamental junipers like the fairy veils of a different culture. The other day, I began thinking about what the Bible says about them. I hope home-schoolers, grandparents and others will enjoy sharing what I found. 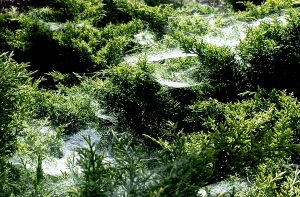 Isaiah said evil men “weave the spider’s web” (Isaiah 59:5).  Good image, if we want spiders to continue being the stuff of our nightmares. Sir Walter Scott sure thought so, turning the web into the ultimate liar’s lair in his unforgettable two-liner about tangled webs.

Job 8:14 says if we forget God our “trust shall be a spider’s web,” in other words – fragile. Wait, what? Oh well, without Google and NatGeo TV, how could Job could have known that a given weight of spider silk is as strong as the same weight of steel?

And then comes Proverbs 30:28: “The spider skillfully grasps with its hands, and it is in kings’ palaces.” What do you think, good press for the six-leggers?  Coming after other verses describing creatures “little upon the earth, yet exceedingly wise” (Prov. 30:24), the answer seems obvious. And here’s where knowing Hebrew comes in handy. As I mentioned in my blog entry “Where the Language Meets the Land” sometimes things get lost in translation.  Out of some 52 English translations of this verse, I found that about 28 call the creature a lizard, not a spider!  In Hebrew, the word for lizard is smamit (in modern Hebrew, it refers to a Mediterranean house gecko). Scholars did wonder how a literal lizard turned into a scriptural spider, especially because the usual biblical word for spider is different. Even Rashi weighed in on it (he stuck with “spider” by the way).* 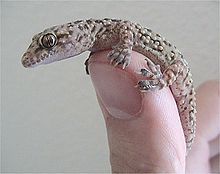 A Mediterranean house gecko. Is this what Proverbs 30:28 meant? (Wikipedia)

And now, for the tale I promised you. The much longer and more involved original comes from an early medieval source called “the Alphabet of Ben Sirach.”  The backdrop is En Gedi on the Dead Sea. If you have photos of your own visit to that beautiful oasis, you can show them when you tell the story, which springs from David hiding from Saul in I Samuel 24.

“And it was when David was hiding in a cave from King Saul that God set a spider who spun a web over the opening of the cave and the cave was closed up by the web. [Saul said] surely no one has entered here for if he had entered he would have torn the web apart. And so he went away and did not enter the cave. When David emerged and saw the spider, he kissed him and said: ‘Blessed by your Creator and blessed be you.”** 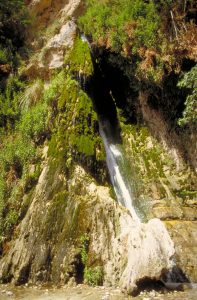 In other words, we might say, every creature has its purpose in the great skein, I mean scheme, of things.

*There are several versions of this story. I found this one in Humanism in the Talmud and the Midrash by Samuel Tobias Lachs, Fairleigh Dickinson University Press, 1993.

** Proverbs, The Soncino Books of the Bible: Hebrew Text & English Translation with an Introduction and Commentary, edited by Rabbi Abraham Cohen and revised by Rabbi A. J. Rosenberg (New York : Soncino Press, 1993),  p. 207), quoted on www.kjvtoday.com.