Ancient Jewish sages taught that Mordechai the Jew saved gentiles, too. This is a tale for our times.

There’s no holiday like Purim to combine a story of the survival of the Jewish people against the enemy all around, women’s empowerment, an odious villain whose name we drown out with noisemakers, and kings, queens and courtiers in a glittering palace setting. It’s a holiday just begging to be celebrated with revelry and costume (and food of course). But this, for a change, I hope, is not about that. This is about an issue with us now that no amount of noise-making can drown out.

An article by Talmudic scholar Yakov Z. Meyer for Purim 2010 that appeared in Haaretz opened my eyes to this issue: Early in the Book of Esther, which we read last night in Jerusalem synagogues, we’ve got what seems to be a literary device – how to place Esther squarely in the sights of King Ahasuerus as more than the beautiful virgin after whom he lusted, to replace Vashti, who refused to be a victim of his drunken bidding. Esther’s cousin Mordecai, lurking around the gates of the palace in which he has insinuated his comely cousin, hears two of King Ahasuerus’ guards plotting to kill the sovereign. Mordecai gets word to Esther, who reports it to the king, who has the two traitors executed. 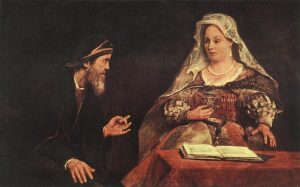 Meyer introduces us to a midrash that zeros in precisely on this device:  Since Mordecai is a Jew and Ahasuerus is not, the midrash asks, why should Mordechai have cared about the king? Meyer tells us that Rabbi Judah answers by enumerating biblical instances where Israelites reached out to aid non-Israelites. Rabbi Judah recalls that Jacob, interpreted Pharaoh’s dreams. Daniel interpreted Nebuchadnezzar’s dreams. The midrash then goes on to say: “If they (the gentiles) are in trouble, they consult with us and we reveal the answer to them” (Bereshit Rabba 39:12)

According to Meyer, Rabbi Judah cites Psalm 119:100: “I am wiser than my elders” (I quote the translation of this verse, in Hebrew: mizkenim etbonan, rather than the translation that appeared in Meyer’s article, but either translation makes the point.) We are to understand that Rabbi Judah is saying in Mordecai’s name: “I can do even better than those who came before me who helped non-Jews;  I’ll save this non-Jew’s life.” Rabbi Judah’s interlocutor, Rabbi Nehemiah, quotes from Genesis 12:3, where God tells Abraham: “In thee shall all the families of the earth be blessed” (Gen. 12:3). Thus, Meyer says, God defines not only the relationship between Abraham and his descendants, but between us and the other, which to me means those not of our culture, faith or nation. That relationship is one in which we endeavor to bless the other by our actions.

According to Meyer, the midrash asks a question, why should Mordecai help non-Jews, that might mislead us into thinking this passage is ethnocentric, to say the least, only to give the answer that Jews are obliged to be anything but.

This brings me to a Talmudic saying that seems on the surface to justify helping our own people before we help others. It is often quoted these days by those (including, recently, our interior minister, who is a rabbi) blithely trying to justify withholding or withdrawing assistance to the African asylum seekers in Israel who now face deportation to countries where their lives are in danger . That quote is: “The poor of your own city come first.”

People don’t know that this isn’t the whole statement, and believe it means the ancient sages who interpreted the Bible are giving them license to delay or avoid caring for a person of a different race, religion, or nationality.  Such a dictum would certainly mean Mordecai should not have warned a non-Jewish king of his impending assassination.

But the verse has more: In the Talmud (Baba Metzia 31b) this dictum appears a discussion that seems to revolve around one word: a Hebrew grammatical construction translated as “surely.” The sages list a number of verses where the word “surely” appears as a kind of emphasis. One of these is Deuteronomy 15:11: “Thou shalt surely open thy hand unto thy poor and needy brother, in thy land.” In the same vein as the sages’ question about Mordecai’s “strange” obligation to a gentile king, one of the sages responds regarding this verse:  “I know this only of the poor of thine own city. Whence do I know it is of the poor of another city? From the expression: Thou shalt surely open. That is, in all cases.”

Only when we take the verse in its entirety can we recognize and appreciate the ancient Jewish commitment to care for all in need. Anything else, anything less, is a masquerade fit only for a drunken Purim party.

I  thank each and every member of my recent tour group from The Chapel, St. Joseph, Michigan, so ably led by Pastor Phil Bubar, for their warmth and love for the Jewish people and our customs, for celebrating Purim with me in Jerusalem this year. I republish this Purim blog in their honor.