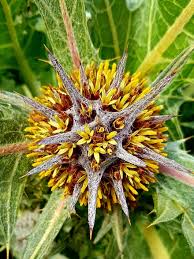 Here’s some springtime inspiration from an unlikely biblical plant.

The signs of spring are unmistakable wherever you live, but in Israel, they’re biblical too. On my daily dawn walk with Daisy, our mini-Maltese, she and I listen to the “voice of the turtledove” calling from the cypress and cedar trees. When I began writing this blog post, the new moon was a scythe hanging over the Valley of Ayalon. (Now, as we await Passover and Easter, it’s almost as round as a Seder plate.) Speaking of scythes, the barley harvest is on its way. And I saw a young neighbor of ours pluck a purple wisteria cluster from his garden vine and place it under the windshield-wiper of his wife’s car. Yep, spring is in the air.

Everything is politics as they say, never more true than these days after Israel’s national election. That’s precisely why for my Passover-Easter post this year I’ve gone to nature for some inspiration. I want to tell you about springtime bloomer, Tournefort’s gundelia, known in Hebrew as akuvit hagalgal and in Arabic as akub. In English – tumbleweed.

The flower, nestled among thorny protrusions, is a snazzy yellowish and purple. It has an amazing structure, as artist and landscape architect Relli de Vries has pointed out, just made to ensure it lives long and prospers: Each time a new branch emerges, the main stalk bends a little to make room for it, which means that by the time the plant is finished growing, it’s almost round and can be huge. When it dries out, its leaves become sails that catch the wind and roll it along. In fact, part of the Hebrew the name contains the word for wheel.

In Israel you can find gundelia almost everywhere: from snowy Mount Hermon to the warm Red Sea coast near Eilat. In the quiet of the desert, along an empty highway or hillside, you can hear its distinctive sound as it moves along, a whish-whoosh that’s almost like a whisper. In fact, the Bedouin call it the “whisperer.” They say the akub brings the latest gossip from where it’s been, and takes it to where it’s going, sighing into the wind along the way.

What does the Bible have to say?

Scripture takes a dim view of this plant, which it calls galgal. In Isaiah 17:13, the prophet warns that the nations that forget God will be pursued like a galgal. The Hebrew word galgal literally means “wheel.” Various translations have grappled with the idea of turning someone into a wheel. It definitely sounds like an unpleasant prospect.

The Masoretic and New King James version of Isaiah 17:13 seem to have been stumped and rendered the word “rolling thing.” The NIV saves us some trouble and goes straight to “tumbleweed.” The other place the word is mentioned is Psalm 83:13, which implores God to turn the enemy into a galgal. There, the Masoretic and the New King James render the Hebrew word as “whirling dust,” while, once again, the NIV gives us “tumbleweed.” How did the NIV know? Maybe from the work of the medieval Jewish sage Rashi who was apparently the first to identify the biblical Hebrew galgal as tumbleweed – our Tournefort’s gundelia.

Sans grundeliah’s thorns, which are carefully cut away during preparation for cooking, its fruit resembles an artichoke. They’re a delicacy in local Arab cuisine and are so much in demand (and worth a great deal of money to harvesters looking for a bigger haul than just to fill their own pot) that the plants are now said to be endangered in Israel. As a result Israel’s nature authorities have banned harvesting it in the wild. This has led to quite a backlash over the past few years, with Arab and Druze gundelia hunters claiming that outlawing its picking is discrimination. I guess everything really is politics.

Given the over-picking of the plant in the wild, at Kibbutz Ayelet Hashahar in northern Israel’s Hula Valley farmer Eli Galili is cultivating akuvit commercially. After 10 years of experiments he now has fields full. When I spoke to him the other day, he told me they had already harvested a bumper crop.

Rolling from a place it knows to a place it doesn’t is the only way for gundelia to spread its seeds, even after it dies. From its birthplace it takes the resources it needs to grow and flourish, and then, in an essential part of its life cycle, it takes all the knowledge it has gained as it grew and strikes out to new horizons – surrendering to the lay of the land and the winds – moving out of its comfort zone to give all it can give. Gundelia has to wait until the end of its life to do all of that, I’m making a springtime resolution to start doing so today.

My thanks to Relli de Vries for sharing her inspiring thoughts about gundelia.